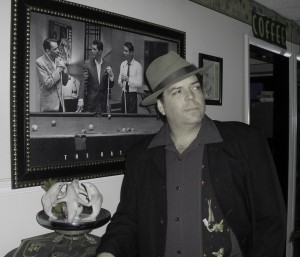 Vintage music DJ Christopher “Riff” Pinto is a connoisseur of jazz and swing, vintage cars, and mid-century style. With over 20 years of vintage-themed performances behind him, Riff has a familiarity with the music, styles and cultures of the past that help turn your party into a truly memorable event.

Riff is more than just a DJ. He is a mystery writer (Amazon Best Selling Author), actor, musician and artist. As owner of Stardust Mystery Theater, he wrote, produced and directed several murder mystery dinner shows in the Atlantic City area, racking up hundreds of great performances over its 10-year span. All Stardust mystery shows were vintage-themed, from roaring 20s gangsters to 1950s beatniks.

He is an accomplished sax man, who headed the “Vintage Blues” quartet throughout the late 1980s-late 90s. In his spare time he has written three novels in the Bill Riggins detective mystery series, plus a book of flash fiction and a comical “how to” guide on killing vampires. All of his books are written in the mid-century “Noir” style with a modern twist; the Bill Riggins series takes place in the 1950s with flashbacks to the 1930s and flash-forwards to the 1970s and 80s. 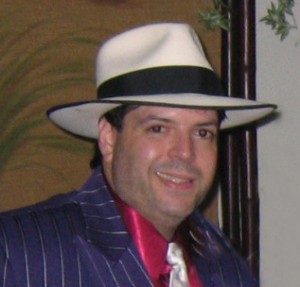 Riff has been a lover of big band, jazz and mid-century pop music since his early years. After receiving an original 45 RPM recording of Glenn Miller’s String of Pearls at age 12, he realized that it was that style of music that really called to him. All this makes Riff uniquely qualified to MC/DJ any event that calls for that special touch…swing, jazz, and mid-century pop and vocals that make your upscale event truly fantastic! 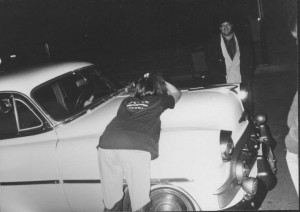 In addition to music, vintage cars is another love of DJ Riff. He’s owned over 30 classic cars over the years, some of his favorites being: 1940 LaSalle, 1963 Imperial Crown, 1974 Cadillac Eldorado Convertible, 1960 Cadillac Sedan DeVille, and a 1941 Dodge Luxury Liner. But his favorite of all is the 1953 Chevrolet Bel Air that he bought in 1990 (for $500 at a yard sale). He and his father restored it together, then in 2000 he decided to do a wild-custom hot rod job on it. He still owns the car today, now with a totally custom interior, custom engine, and 33″ tail fins – all done by Riff himself.

“Tiki Chris” – Riff is also known in certain circles as “Tiki Chris”, a connoisseur of mid-century Tiki bar culture. As Tiki bars and exotica music were a huge part of mid-century culture, it’s became one of Riff’s passions over the years. He currently writes for the Tiki culture website “Tiki Lounge Talk”, and hosts the Facebook page “The Retro Tiki Lounge”.

Vintage Riffs Entertainment is available for events in most of Broward County, Palm Beach County north to Boca Raton, and parts of Miami. Further areas incur an additional travel fee. If your event is outside of Broward, Palm Beach or Maimi-Dade County, please email us for information. 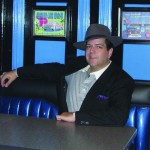